The Maud and Everett Lewis Story 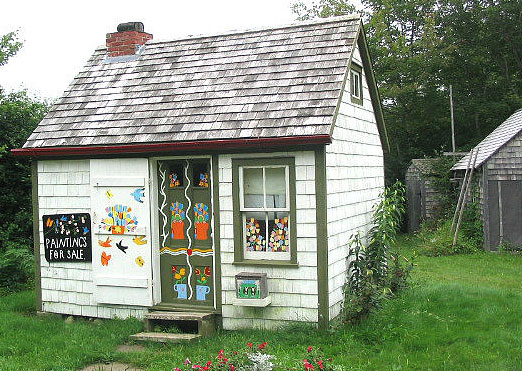 Without going into a lengthy story of the life of Maud and Everett Lewis, as other writers have already done in book form, it is my pleasure to share with you a story yet untold to many. It is my story of joy here and in heaven.

Maud Lewis (1903-1970) was recognized and revered in her own lifetime. She became famous across North America for her folk art, by offering her engaging images to the passing world through her roadside Paintings For Sale sign in Marshalltown, Nova Scotia. Maud, though severely crippled, of fragile health, and living under the poorest of conditions was both famous and loved. All the dignitaries in Digby County, including members of the Legislature and Parliament attended the funeral. Her burial was the best attended in decades.

While Maud's love for God and His creation can be seen through some of her paintings, her husband, Everett, painted a far different image on the minds of most. He was a man of rough appearance, a miser to say the least, and a rejecter of anything that pertained to God. In fact, a graveside funeral service was held for Maud on August 3rd, 1970 because Everett would not enter a church building. He created a disturbance at the funeral, and the minister conducting the service cautioned Everett, who'd been drinking, to listen to the voice of the Eternal.

Many, after Maud's death would not go near the tiny one hundred seventy square foot home in which they lived and where Everett was busy selling the last of Maud's belongings to those who did stop by. He even sold the sympathy cards he had received for a little extra change.

I was one of those who would not go near that home. However, one day as I was driving past, looking as always through the open door and painted windows to the unsanitary interior, God spoke to me. The Holy Spirit said, Stephen , go in there and tell Everett of my love for him.

I drove on by trying to dismiss the voice of God.

Only a few yards away, came a more powerful message, Go back!

I knew it had to be God. I would go anywhere but there to tell a man about God's love. I remember saying, This has to be you, God. It sure isn't me.

I turned around in a driveway and went back. As I entered the open door, Everett Lewis was seated beside an old wood burning stove in the only room other than a loft. I talked with him for the first time in my life and told him of the love of God and God's plan of salvation through Jesus Christ.

I said, "Mr. Lewis, you likely will never enter a church building in your life, you cannot read a Bible, but you can pray every day of your life and thank God for saving you."

Tears began to flow as he asked God's forgiveness. He prayed with me and received Jesus as his personal Savior.

Just shortly after that, a young man broke into the little house hoping to steal money and Everett died in the struggle.

But let it be known that he went home to Glory!

Let us all listen to the voice of the Eternal.

This ministry has worked or is still working very hard in the countries represented by the flags below.

PLEASE BECOME A PARTNER IN THIS GREAT OUTREACH MINISTRY TODAY